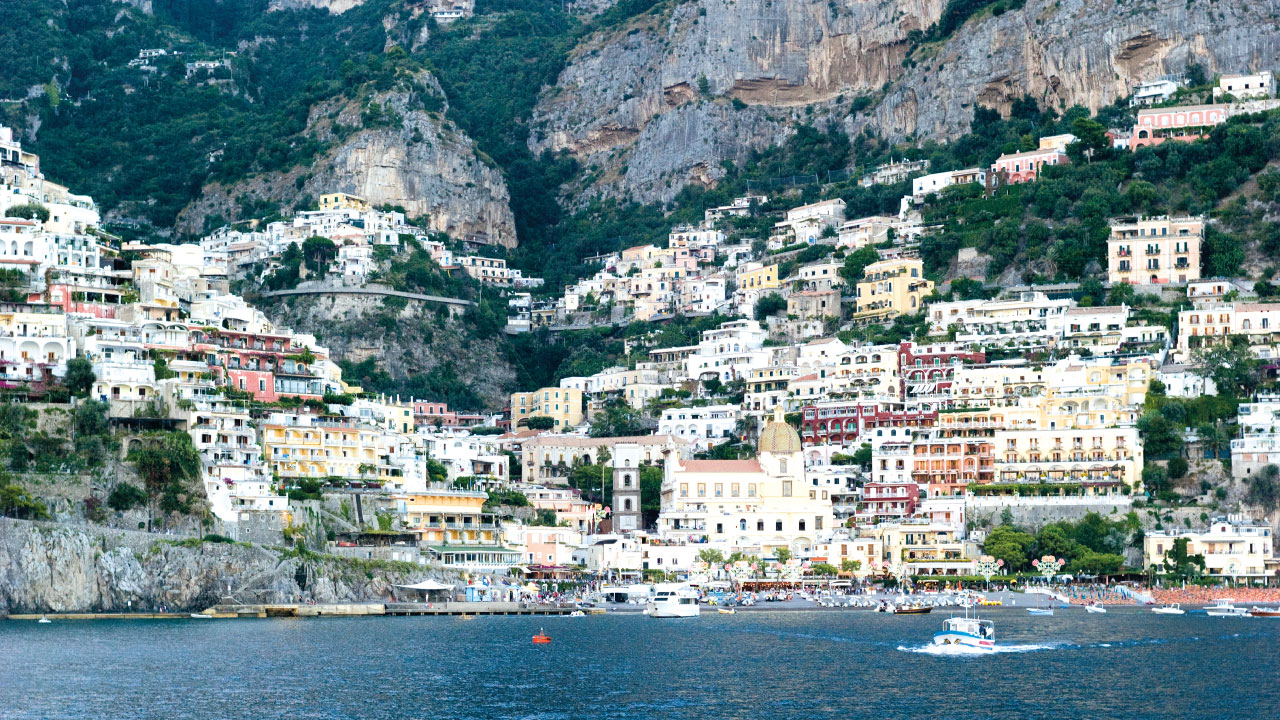 We introduce you to the “precious” Amalfi Coast, a wealth of flowers, rocks caressed by sunlight and the wide open sea.

Together we leave for the discovery of the virgin coast and the natural beaches accessible by sea only, an ancient world made of old houses sheltered behind historic churches, linked together through narrow lanes and steps, the squares becoming “open-air” living rooms, a stage of artistic and culinary displays. Come and discover the Amalfi Coast with us sailing along the coastline and experiencing our organized land tours. From Salerno to Vietri. White, green and light blue, the typical colours of ceramic made in Vietri; these colours reflect in the waters the spirit of the village that was once a small port. Two rocks seen in the middle of the sea are called “I due fratelli” becaming the symbol of the village (according to the legend these rocks represent two brothers reunited after their death by the divinities of the sea). Vietri is very characteristic because of its white plaster rococo buildings, its sheltered narrow lanes, the laundry hanging outside, its balconies, fountains and the shop signs made of ceramic.

A scenic tower which dates back to the XVI century, “Torre Crestarella”, built by the Spanish viceroy of Naples, Don Pedro de Toledo, dominates the beach which also carries the name of the tower. With its 120 metres of sand mixed with small pebbles, Crestarella beach is our first stop. Afterwards, approaching Cetara, you will experience the illusion of looking at a small oasis: the reflection of the small houses sparkles on the water and the surrounding rocks of the strand. Catara was the ancient Saracen fortress and its name comes from Latin Cetariae, “tonnara” (tuna-fishing net). Further on we discover “Spiaggia dei Limoni”, a small bay 20 metres long accessible by sea only, a preserved place of beauty. It is nestled into a bushy lemon tree grove that dominates from above and a rocky wall sheltering it from the western breeze. Afterwards, between the sky and the sea, the tower of Erchie. At this point, you will feel as if you would never want to break the silence of such enchanting natural beauty. Here, peace and nature blend together. The Tower of Erchie, with its four machicolations at the top, is made of local calcareous stone and today is in very good condition, compared to the other towers of the coast. Its original shape has been preserved through the centuries, with its enchanting position on the rocks that fall into the calm waters. Further on we find Capo d’Orso, the headland of the Peninsula Sorrentina, represented by the ridge of the Pertuso Mountain that plunges into the sea (the mountain is in the shape of a bear that gives it its name). Capo d’Orso is located between the innermost part of the Gulf of Salerno and the bay of Amalfi. The emerald waters invite tourists to visit Grotta Pandora, a natural cave located a few minutes by boat from Maiori, where it is possible to see precious stalactites and stalagmites. Later we will reach a small creek with water falling into the sea from high above. Here you can bathe hearing the sound of a natural waterfall, Marmorata Falls.

Then we will pass Maiori, with its ancient marine style, characterized by art and cuisine,

“an imaginary city, a history not completely lost…” (Salvatore Quasimodo)

Minori, the city of flavour, where limoncello, pasta and tradtional pastries are produced. The typically tapered lemons have excellent organic and medicinal properties and are an essentiel ingredient of Amalfi Coast cuisine.

Continuing we discover Atrani and Amalfi; you can experience Amalfi by boat or by land excursions, walking along its narrow streets with steps that lead up to the top of the city. A fascinating small town with ancient white walls and an irresistible marine style, the deep grayness of its steps, a delicious local lemon cream dessert, red hot peppers sold along the lanes, the green majolicas and the ancient history of the famous Amalfi paper. When the sky seems to blend into the sea, it is time to approach Conca dei Marini, where in 1700 a shell-shaped cake was baked for the first time in Santa Rosa monastery. It was made of thousands of thin puff pastries rolled into each other, filled with custard and black cherries: the so called “sfogliatella di Santa Rosa”. Going beyond Capo di Conca, we will stop at a beautiful bay with clear and shallow waters just under the cliffs, often the spot of visiting bathers, scuba divers and canoeists. You cannot resist the temptation of bathing in the waters of “Fiordo di Furore” which is accessible by sea or by the steps along the rocks leading to the beach. It is a wonderful experience especially around midday when the sun rays reach down to the cliffs. Deep waters offshore, pebbles and crystal clear waters ashore. Later we discover Praiano reaching the islet of Galli. Once it was called “the mermaid’s island”: it is said that Ulysses passed here avoiding the three captivating mermaids Partenope, Leucosia and Legea. This is where the coast becomes a real living paradise, and it is said that ancient locals weren’t worried about going to heaven or hell in death since they had already experienced heaven during their lifetime on the Amalfi Coast. Going further we find a series of white houses, arches and domes famous all over the world: this is Positano. Positano is full of rocks that look like goddesses, colored boutiques and art galleries; here you can truly feel the influence and tradition of religion and local cuisine.

Departure at 10:00 (or depending on customer needs) from the port of Salerno (or from other parts of the Amalfi coast where it is possible to board).
The return to the Salerno base is scheduled at 17:00.
Night Hours:
Sunset 16/20
Night 18/24